Kafka and Samsa: Unforgettable and Irreplaceable 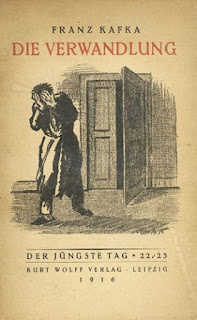 Franz Kafka’s humour-laced, absurdist take on life and death ‘The Metamorphosis’ is best savoured in wholesome sips.With each read, we learn more about the bizarre trials and tribulations of the protagonist Gregor Samsa, a traveling salesman perpetually buried under the burden of meeting family’s pressing needs and obligations. To begin with, the reader somehow accepts the phantastic premise of the story (one gloomy morning, Gregor transforms into a repulsive insect) but willfully treads the thorny path headed towards larger, uncomfortable truths, like the inevitably circumstantial nature of familial and societal relationships: how one ghastly metamorphosis can trigger equally gruesome mutations. While Gregor, in his invertebrate form, suffers a terrifying disconnect between mind and body, his family members graduate from feeble compassion born out of shock to a fierce hatred rooted in dysfunctional developments and horrendous social embarrassment.

There’s a tiny paragraph towards the fag end that would bring any sensitive reader to tears, although it unfolds the steely character of the protagonist’s resolve in matter-of-fact fashion, right after the door to his room is ‘hastily pushed shut, bolted and locked’ by the family, following an altercation with tenants following Gregor’s ‘guest appearance’ in the living room. No flourish of adjectives, no overt glorification, simply a running commentary about Gregor’s precipitous discovery of a latent truth: that he is not surprised at not being able to move at all, in fact, he finds his stationary position relatively comfortable, one which strengthens his conviction to 'disappear'.

In his dark confines, his nagging pain gradually passing away, he slips into an empty and peaceful meditation all night long, till the wee hours of the morning. When the ‘first broadening of light in the world outside the window enters his consciousness’, ‘his head sinks to the floor of its own accord’ and the ‘last flicker of his breath leaves his nostrils.’

Thus ends his painful, protracted and futile struggle to fill the enormous vacuum caused by his vermin form. This is as dignified a death as death can ever hope to be, but alas! Gregor’s martyrdom must go unsung; worse, even cheered as good riddance. Kafka makes the settlement utterly unsettling, intentionally of course. One instinctively sides with the tragic hero, but there is nothing really that one can hold against the family. An earnest reader is simply left with a bagful of questions that demand introspection ahead of answers.

Beyond doubt, Kafka and Samsa are unforgettable and irreplaceable!