The Natsamrat of Socratic Sensibility

Dr. Shreeram Lagoo is invariably worshipped as the King Lear-like Appasaheb Belvalkar in V V Shirwadkar's epic Natsamrat. But Makarand Sathe's highly incisive Surya Pahilela Manus, Lagoo's farewell performance, must be rated as one of his very best, in the league of his memorable roles including Antigone, Atmakatha, Udhwast Dharmashala, Maadi, and Gidhade among others. Defying age and ailment, Lagoo singlehandedly steered this play to fruition, partially helped by Sathe's pithy prose and Atul Pethe's purposeful direction, which lend the play a robust structure of distinct, defining episodes that make sense, both chronologically and metaphorically. 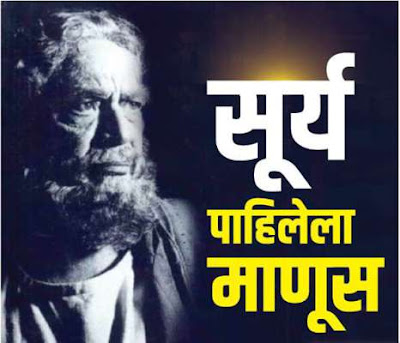 The Trial of Socrates raises several questions rooted in intrigue and wonderment. To this day, historians and other experts have not been able to separate fact from fiction. That both Plato and Xenophon have been accused of being selective about their respective reportage make matters even more complex.

As Gabriel Danzig of the Bar Ilan University aptly observes, "The accounts of Socrates' behavior in court given by both Plato and Xenophon stem from the need these authors felt to respond, in different ways, to the post-trial debate about Socrates." Much before Plato and Xenophon, reportedly in 423 BC, Aristophanes sketched Socrates as a disdainful preacher in The Clouds, who swears by his own deities and invariably promotes antagonistic ideas. How much of this comedy influenced the trial, if it did in the first place, is still being furiously debated in certain circles.

It is best to sideline, if not ignore, the debatable aspects of the chronicles and focus on some tightly coupled truths, for the universality and sheer relevance of Socratic thought more than condone the historical obscurities surrounding the man, the Athens of his times, and his trial, however knotted they may be.

Socrates should always be remembered for the timelessness of the situation that led him to claim his life before his adversaries could. To this day, we see poets, politicians and public speakers forming unholy alliances worldwide, collaborations rooted in tyranny and thriving on censorship. When the people in power assume the right to define piety and impiety in overtly blasphemous ways, even a semblance of argument is labelled antagonistic, best nipped in the bud.

Similarly, Plato's Republic, which endorses the ideal state based on the Socratic vision, is equally relevant to us, especially the allegory of the cave and the analogy of the sun which probe deep into the nature of perception and the purpose of education.

Makarand Sathe weaves a beautiful tapestry of Greek thought in Surya Pahilela Manus that begins with three people engaged in a heated conversation which appears trivial on the face of it, but as we proceed, we gauge the rich symbolism underlying the banter: the sheer diversity of our dispositions and the corresponding positions. They pave the way for the inspirational tale of Socrates, featuring the last phase of his life, but only after an elaborate recreation of the cave allegory. Sathe is unflinchingly focused on Socrates's heartfelt, cogent plea in the course of the trial and his towering stoicism amid helpless followers watching him willingly succumb to the diktats of the hemlock cup.

The play is mesmerizing, to say the least, thanks only to the dynamic duo of Dr. Lagoo and Makarand Sathe. I would prefer Surya Pahilela Manus to Natsamrat any day, given the way this pair has recreated Athens, the way Sathe has penned the lines, and the way Lagoo delivers them.

Critics often cite a 25-minute soliloquy as the crowning glory of Lagoo's enactment, but it's his endearing conversational tone, the play's hallmark, that strikes immediate resonance with the audience, making the uninitiated wonder if Athens was some forgotten city in Maharashtra, maybe in Samyukta Maharashtra.

"Crito, kat manje kay he na kalnyaitka me murkha naahi" (Crito, I may be naive but I know what a conspiracy is)

"Crito, raajkaranachya baher asana manje rajnakaran na kalana navhe"(Crito, one need not be in polity to fathom it)

What effortless acting! Every gesture of this great actor reflects his delight of playing a dream role, precisely why the constant tremor, periodic slur, and occasional lapse hardly bother him. I consider myself lucky to have witnessed him in action; the You Tube video may be dated, but it will never turn stale. It is undoubtedly the best tribute to the man and his times.

That Dr. Lagoo got this opportunity at the fag end of his career is reflective of:

1. The extreme poverty of the mainstream tribe in making Lagoo repeatedly do what came to be unfairly known as Lagoopanaa (Lagooness), although the Hindi film industry deserves accolades for paying the thespian well. (Watching Lagoo as the singer-beggar in Gulzar's 'kitaab', or as the low-caste worker in a Rajesh Khanna horror called 'Sautan' was extremely painful, though one can always enjoy a hearty laugh watching a fair-skinned chitpavan Brahmin posed with the challenge of rendering the impossible with laughable makeup)

2. The jaundiced abundance of the glorified 'offbeat' tribe which only claims authority and necessarily shuns introspection. Narcissistic makers and adopted journalists together stage an intimate theatre based on mutual admiration; captive boutiques guarantee generous critiques, prescribing plays and films as "must see" after formulaic reviews of extolling pros (gripping drama, nimble writing, supernaturally charming, scathing probe, surreal experience) and ornamental cons (the second half is somewhat wobbly, the accent lighting is rather weak). For this tribe, a Vishal Bharadwaj falling back on Shakespeare would still amount to breaking news, and his punctured adaptations would still be hailed as masterpieces. The mere announcement of any Shakespeare adaptation is greeted with a loud cheer, unless of course the makers are either confirmed non-entities, or the professional applauders bear a personal grudge against them.

3. The faint hope that Sathe and his committed troupe keep aflame against all odds, both thrust on them and home-spun.


Barring few instances, all bit players of Surya Pahilela Manus deliver rehearsed performances, in the way they stand, talk, move about, or express their angst. Yes, this is a universal issue plaguing our theatre which invariably mars the collective fruition of any play. But the damage is devastating in the case of plays of this genre and quality. The playwright's, and the protagonist's, effort deserved a better outcome.Thankfully, the set design, costumes, and makeup help build a believable Athens, and the haunting background score is fit for purpose.

The support cast could yet derive some inspiration from Dr. Lagoo's enactment to bear the weight of deep, profound dialogues in future plays of this genre. They should closely observe Dr Lagoo: how he instinctively folds his sleeves, adjusts his shawl or presses palms together while delivering loaded lines. The day they realize what appears instinctive was only a conscious effort, they'll get it. So would we!

Surya Dakhavnaraa Manus (The Man who showed us the Sun) 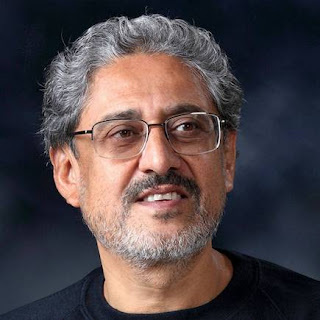 Architect and playwright, Makarand Sathe has undoubtedly made absurdist theatre more actionable if not always agreeable; you may reject his metaphors, you may challenge his notions, but deep within, you will be compelled to ask terrifying questions before seeking liberating answers. An exasperated few may even ask “Sathe cha kay karayacha” but I am sure he will go on (To Pudhe Jaail), which is how it should be, for this continuum ensures the progression of Marathi theatre and even minds: both mainstream and experimental.

He was kind enough to answer some of my questions on SPM on priority even though he is currently traveling. Thank you Makarand!

1. How did the idea of SPM evolve? How did you approach the difference between Plato's and Xenophon's accounts or the diversity of opinion on Socrates (some find him anti-democratic)?

I was not interested in Socrates per se. I was interested in some of his thoughts which I thought were valid in contemporary Indian reality then. Unfortunately, they are as valid, or even more valid today. I also saw a connect with Gandhian thought somewhere. So, who among Plato or Xenophon is more valid is immaterial. Though, I would go with Plato as I agree with Russell on that count. Also, debates about Socrates being against democracy are only partially valid as democracy is Athens was a joke anyway, what with poor people, slaves, and women deprived of voting rights.

2. Was Dr. Lagoo your predetermined choice to play Socrates?

Yes, Dr Lagoo was indeed my first and only choice. In fact, he was the one who induced the play's making. He wanted the play to move on biographical lines, but I made it political and philosophical. He had doubts if my version would work at all.

3. How long did you take to write the play? Did you write at one go?

I took about 24 hours to make the first draft. I had done all the reading earlier as part of my normal reading process, not specifically for the play. Of course, there were several subsequent drafts with additions and modifications - till the play was actually staged.

4. Could you share few details of the making of the play?

I was part of the staging process. It was a rather straight forward affair. I would have liked more intellectual investment from all stakeholders.