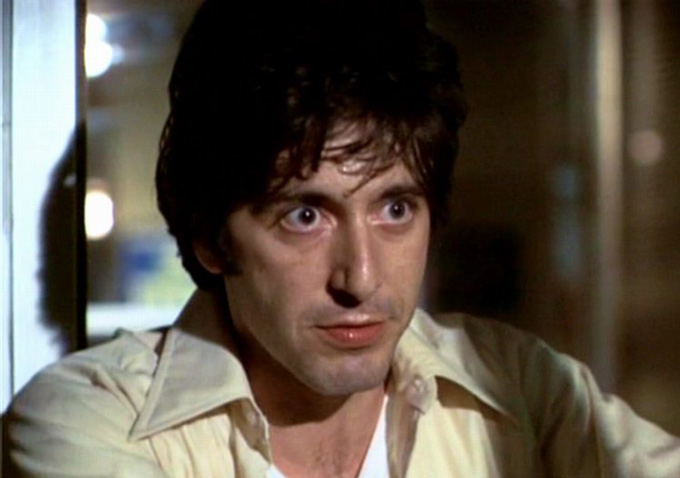 From the debut part in 'Me, Natalie' to the upcoming 'Trial of Axis Sally', his film career has been a whirlwind, as wayward as his life: of a troubled 'Bronx' childhood, deserting father, depressed mother, street gang patronage, and a host of desperate ways of earning money - from shoe shining to moving furniture.

Thanks to the 'Panic in Needle Park', Francis Ford Coppola discovered him for the world's benefit, fighting Paramount Pictures and Mario Puzo who were dead against casting a nobody resorting to ad-lib to play Marlon Brando's youngest son in 'The Godfather', a pivotal character with maximum screen footage. The rest is a lot of history, geography and civics.

We are not lucky enough to witness his theater performances like  'Hello, Out There',  'Does a Tiger Wear a Necktie?', 'Richard III', 'Merchant of Venice', or 'Salome.'

However, we do have an equally engaging option of watching his films all over again.

His 'Micheal Corleone' is of course part of folklore, but he is unforgettable in most parts, save for a few trashy flicks where the shoddy material mars his sincerity, which hence appears gaudy. And we are not referring to "Godfather III" which was not as bad as the media would like us to believe.

It is so easy to excuse this short man of tall stature for all his temperamental liberties.

All you need is pull back your chair without fastening the seat belt, such that you can feel the length and breadth of the character's screen turbulence:

Or you could recall the lovable Cuban Tony Montana in any scene of 'Scarface' - whatever the choice, the effect will be the same! Tony makes us believe in all the nonsense he believes in. There's no visible effort - either his or ours.

You could rekindle the memories of the whistleblower cop Frank 'Serpico' who famously remarked - "I am retarded - I mean I am retired."

or why not relive Arthur's heartrending wail from 'And Justice for All' - I can't appeal it, he's dead! he's dead! Half hour after they put him in the lockup, he hanged himself!"

There is an easier way out - you could simply exclaim "Hooha" with all your might.

He is not your everyday method actor; he makes method and madness delightfully synonymous. Precisely why his talent doesn't need the validation of Academy Awards, nor the showy endorsement of a blatantly exhibitionist media.

At 81, he wants to play Pablo Picasso. Hollywood tycoons - Alfredo James Pacino deserves this treat as one of his swansongs. Just that he shouldn't be allowed to stop at Picasso. Let him say - "Just when I thought I was out ...they pull me back in."