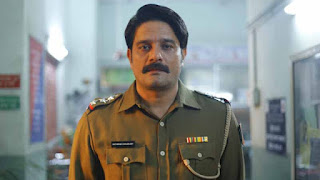 Kudos to Amazon Prime, Clean Slate filmz, and Casting Bay for treating us with one of the most enduring characters on any screen - Inspector Hathiram Choudhary of Outer Jamnaa Paar Police Station. All adjectives fall short of describing the magic actor Jaideep Ahlawat creates, along with Ishwak Singh (as Chaudhary's UPSC-aspirant deputy Imran Ansari) and Abhishek Banerjee (as the stoic, spiritual gangster Hatoda Tyagi) in the Amazon web series Paatal Lok.
Media reviews have predictably focused elsewhere - similarities with David Fincher's crime thriller SE7EN, Neeraj Kabi's portrayal as the marked journalist (he is good, but way short of the Ahlawat benchmark), or the beauty of Sudip Sharma's pen (he is truly outstanding, but there are flaws hard to ignore: the pet, pseudo-secular effort to inorganically underline the 'Muslim' case, needless Bachchan-like escapades of Hathiram, and the staple Hindi belt ganglord-centric folklore that we have already seen in Ishqiya and Omkara. However, Sharma's religious motifs and the central metaphor of the dog are undoubtedly a masterstroke, simply beyond words!)
Ahlawat lends rock-solid credibility to Hathiram's exploits including the roundhouse punches and impossible jumps that the writer has thrust upon him. His acting is astonishingly devoid of any mannerisms whatsoever - defining or otherwise...no dramatic pauses, sighs, or gestures to emphasize a point (and there are many he puts forth throughout the series)
You simply don't detect any 'effort' in his enactment: whether shouting earthy expletives in a rustic Hariyanvi twang, savoring a dutiful late night dinner in solitude, catching up on lost sleep in state transport buses, ill at ease amid the English-speaking elite tribe, religiously jotting down notes in his 'ancient' diary, trying his best to play a doting father and miserably failing at that, or providing a pithy fag-end summary for the viewer's benefit in a one of a kind narration.We are not going to forget his words for a long time to come: "Sanjeev Mehra target hai hi nahi Ansari, target to yeh chaar hai"
Hope we see more of Ahlawat in the time to come. If and when he makes it big, hope he doesn't lose his way like the hugely talented but now hopelessly derailed Nawazzudin Siddiqui. And Abhishek Banerjee of Casting Bay, we can't thank you enough for helping Ahlawat land his dream role in his forties. May your tribe grow!
Newer Posts Older Posts Home
Subscribe to: Posts (Atom)