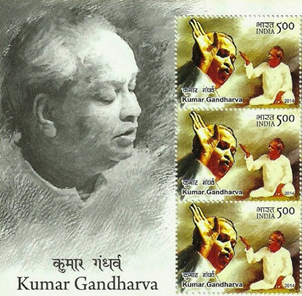 Shivaputra Siddharamayya Komkali, better known as Padmavibhushan Kumar Gandharva, leaves you mesmerized, as much with his aphoristic observations on music as with his spirited singing. This Gandharva of gay abandon was terrestrial by choice: he stood tall, firmly rooted to the ground, unlike several of his mollycoddled contemporaries who cruised in the blue skies of resounding reverence and instantaneous knighthood. Their blithe disregard for the need for musical innovation was hardly ever questioned but his single-minded resolve to rescue music from the eddy of blind convention and brazen complacence was almost unanimously dismissed by many a maestro, musicologist, guru, and critic. Even the luminaries who sided with him were discernibly guarded, more politically correct than socially right in their endorsements.

Thankfully, this thought-leader practitioner was hardly perturbed en route his solitary voyage as a non-conformist singer-composer, which is why he has left behind a treasure trove of pioneering thoughts and soul-stirring performances for our benefit. Approach it for the first time, or mull over it a thousand times, oven-fresh enlightenment is always around the corner, one that inspires us to chart our own trajectories of self-discoveries in respective spheres, beyond mere appreciation and adulation.

Kumarji bares all and shares all without the slightest reserve or discrimination… all that he sensed, saw, felt, heard, transformed or tweaked in his Kabir-like, peripatetic probe into aspects and phenomena that the world simply classifies as abstract and obscure. He may have lost a lung to TB, which severely compromised his breath control and voice pitch, but what he gained from silent introspection enriched music with a vigour and vitality that were amiss in the ornamental Durbar performances of raag sangeet.

In all his vintage interviews, Kumarji has treated us with a sumptuous diet of myriad concepts and nuances that expose the communal triviality of the extremely revered ‘mainstream tribe’ (and leave the interviewer fidgeting nervously or switching gears for obvious reasons.)
When the world first knew about kumarji, he was hailed as a child prodigy who could reproduce the popular renditions of the time to a tee, almost at will. Back then, he was unaware of his genius. That didn't bother the musical establishment as its roots had not been shaken by this tsunami. They welcomed him in, presuming him to be another loyal practitioner swearing by the 'rules of the game'.
But when he became acutely aware of his restlessness, which was accentuated by his illness, his vision and innovation gave them nausea and convulsion. How could they grant folk music its place of pride? How could they validate the claim that Raagas are waiting to be discovered? How could they tolerate the charge that the classical music tradition is in dire need of cross ventilation? Kumarji had great respect for his Gurus, and gratitude was an integral part of his attitude. In stark contrast, he was conferred with the title of a punctuation mark for upholding his non-conformism, a question mark to be precise...

Kumarji’s cherubic frame, his endearing, slightly impish smile, and his wholehearted discourse that invariably began with his pet prelude “gammat mhanun sangto” (I cite in a lighter vein) – these are timeless motifs we can’t ever tire of savoring.

His pithy and prophetic pearls are packed with earthy wit and wisdom:
A few desk-bound musicologists, who call themselves cautious admirers, took great pride in highlighting the inconsistencies of Kumarji’s singing post his bed-ridden days: how he falters big time in mandra saptak, how he falls short in vilambit renditions of his dhuna-ugama raags, how he makes meaning only in madhyam and drut, so on and so forth. Wish these greats had spent some time and effort in rendering at least one public performance rather than flaunt the “trained vocalist” tag only as a license to thrill and kill through their loquacious essays in the name of tributes.
But even this recklessness pales into insignificance compared to the utterly comic and circuitous tribute to Kumarji in a recent Marathi film, supposedly a biopic of the legend P L Deshpande. The portrayal is not merely gaudy, it is downright heinous. Wish the komkali household had refrained from associating with this reeled disaster.

To decipher the essence and credence of Kumar Gandharva, we thankfully have the guiding light of maverick scholars like Dr. Raghava R. Menon, author of ‘The musical journey of Kumar Gandharva’ and genuine admirers like Sunil Mukhi, an IISER physicist of fine intellect and varied interests. We also have Kumarji's son, the reclusive Pandit Mukul Shivputra who inherits his father’s trademark traits: perennial restiveness and unbending honesty.  If one doesn’t read too much into the formative waywardness of his life, one is blessed with great solace, hearing him render “Jamuna Kinare” in his distinct style, very different from his father’s but with a spiritual detachment, just like his father’s.
Newer Posts Older Posts Home
Subscribe to: Posts (Atom)