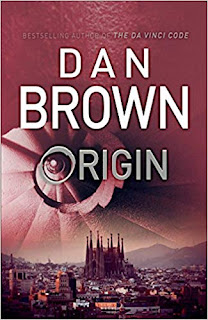 Dan Brown's Origin has his regular protagonist Harvard professor Robert Langdon collaborate with Ambra Vidal, the Guggenheim Museum director and future queen of Spain, and an AI wizard named 'Winston', to decipher a 'poetic' password that will unlock a closely guarded secret that the flamboyant futurist Edmond Kirsh, Langdon's former student, wished to share with the world but could not...

However, Origin happens to tell us more about Destinations given that Brown takes us in and around Spain (making us endure the pain of inconsequential paras, much-abused adjectives, and needless encyclopedic references) only to declare that he has indeed arrived: as a high school English teacher who's cleared the Turing Test and now leads the AI revolution for the benefit of mankind.

Brown's mean machine 'Winston' has already mimicked, nay surpassed, the human brain, faster than Rajni sir's Chitti. Pity Winston didn't bother to validate Langdon's exact feelings for Ambra Vidal throughout their sojourn (and vice versa) if only to reassure the reader, given few lines here and there that indeed raise suspicion; maybe he was kept busy by Langdon on purpose.

The success of Origin should enthuse Brown to offer a masterclass on predictive intelligence as well; his bestseller sermons would then sound even more credible. No point analyzing Origin, given Brown's cult status which is clearly above probe. Instead, we would like to suggest that Dan should go Brown for his next.

Robert Langdon must come to India now; Mumbai will please the explorer in him given the fascinating contrasts of the city born out of a volcanic eruption dating back 5 crore years, a metropolis blessed with a rich heritage of 15 centuries and more than 600 years of foreign rule. Langdon will marvel at the method in madness, order amid chaos, clarity blended with confusion, and hope despite the despair that only Mumbai can offer. As an added bonus are the city's historic monuments to ensure a generous sprinkling of Wikipedia-style monotones that Langdon simply can't do without.

What's more, he will find many unsung versions of Edmond Kirsch (Dan, please don't have them killed, they will make the world a better place one day, and they are unpretentious unlike the showy Kirsh) working tirelessly in ill-equipped labs and yet deprived of VC funding (Most of it is earmarked for food aggregators, learning apps and online grocers.) To replace Ambra, we can have our own Priyamvada Gokhale or Priyadarshini Galgale (entirely Sir's choice, we won't bother him with parochial recommendations).

Most important, the presence of Bollywood is ripe with phenomenal possibilities. Tom hanks of course will have to make way for our rock-solid desi demigods. Ranveer Singh will come close to wearing the crown, amid the mad rush of the ageing Khans, kapoors and Kumars to strike Gold. Alia Bhatt should find little competition whether as Priyamvada or Priyadarshini. And yes, Chetan Bhagat can be roped in as a handy collaborator armed with relevant experience.

We can already visualize Brown sir 'conjecturing' with the one and only Karan Johar over coffee and winning the coveted hamper on National Television.