Astu (So be it): Elephant in the room

As these thoughts passed through his mind, he met an Elephant and came close to hold a conversation with him – Aesop Fables 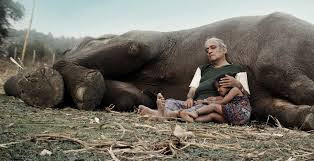 ‘Astu’ (meaning So be it in Sanskrit) is an incisive attempt to probe deep into how a progressive disorder like Alzheimer’s, more than disrupting normal life, makes a dent into the very fabric of familial equations. When elusive conflicts arising from the disorder bring a host of latent differences to the fore, relationships become more fragile and distant than what they seemed before.

Before moving to the bigoted endeavor of film reviews, one must unconditionally acknowledge the highly laudable effort of the producers to sponsor such a sensitive subject which can serve as a stimulating case study in coping with the brutal twists and turns of the ruthless disease. Hats off to Sumitra Bhave for her inventive take on a highly intricate subject as also for the pertinent title.

Retired Sanskrit professor Chakrapani Shastri (Dr. Mohan Agashe) goes from bad to worse even as the irreversibly degenerative ailment plays havoc in different ways. Once revered for his first-rate memory and way with words, he comes face to face with a precariously progressive fag-end reality that begins with words failing him and gradually moves towards more ghastly developments – growing forgetfulness, recurring mood swings and even physical advances arguably redolent of sexual overtures that threaten to bypass the sanctity of relationships. At a time when the family – primarily his elder daughter Ira (Irawati Harshe) - is trying hard to cope with the enormity of the tragedy, the ageing scholar loses his way, this time literally, in the scorching heat of a fateful day, lured by the sight of an elephant on a busy, bustling street. Baffled by the professor’s outrageous request for a ride atop the majestic mammal, the Mahout reluctantly obliges after much contemplation but to his dismay, the old man has even more preposterous plans – he’s resolute to become the fifth member of his family – of self, wife, kid and the elephant.

This is also the time when the professor’s disorder has taken socially embarrassing turns – incessant weeping, pronounced difficulty in communication and loss of bladder control – that call for more intimate, full-time personal care. The Mahout’s wife assumes the responsibility with unconditional, self-springing resolve. Her innate, rustic acceptance of the fact - that the seemingly long-lost, learned man is now her adopted son - is in sharp contrast to the conundrum faced by the professor’s immediate family, despite their highbrow status, in coming to terms with the tragedy. While the elephant woman has become a willing mother to the professor, his kith and kin have knowingly or unknowingly chosen to overlook the elephant in the room.

The makers have attempted to subtly highlight this paradox, made lethal by the longevity of life in an era of advanced medical care and cure, through the wonderful motif of an elephant that’s known to endorse a string of supposedly human-like qualities – and better than what most humans practice - sharp memory, stoic calm and empathy for the clan among others. No wonder, the professor seemingly finds inner peace in the company of the gentle giant, in the reassuring feel of its grey skin, in the tranquility of its somber eyes, in the leading light of its plodding gait...

The ingenuity of the script notwithstanding, the glaring incoherence of the motion picture mars the desired impact. Many loose ends clamor for a tighter grip and prevent the players from hitting a crescendo on a few decisive notes. Astu is off-mark in crucial aspects, which is surprising on two counts - given the veritable credence of its makers – the duo of Sumitra Bhave and Sunil Sukhtankar - easily one of India’s best from the regional stable (with such gems as Vastupurush – a classic of sorts) and given the sheer brilliance of Bhave’s script that was inherently ripe with 24-carat cinematic possibilities. The run time of 2 hours and 10 minutes is marked with umpteen fractured images, consistently flashed back for effect. At best, they serve as poignant postcards galvanizing the viewer’s mind to suspend every form of judgment in conceding to the larger cause. On the flip side, they fail to put the old man's tragedy into perspective. Their earlier film ‘Devrai’ depicted the trials and tribulations of a schizophrenic’s fight back led by his dogged sister with far more restraint and in commendably convincing frames of lucid progression. Interestingly, Dr. Agashe played a wonderful cameo in Devrai, of a psychiatrist articulating the crucial role played by caregivers in precise words.

A proficient psychiatrist and competent actor, Agashe no doubt leaves his indelible mark on his character but the mechanics of the back-and-forth leaps in time don’t make suitable provision for subtly tracing Shastri’s marked deterioration over time. Barring few stimulating scenes – like the one in which he springs forth to enjoy a hearty meal in a supremely jovial mood only to be reprimanded by the family for the thoughtless encore or another where he fakes a memory lapse to abort conversation with a chatterbox acquaintance – most of his outbursts - mood swings, unremitting bawling et al - lack the zing, in the absence of a suitable preface that could have best come through a wholesome dissection by the family friend Dr. Prabhu (given that the actor Shekhar Kulkarni seemed capable of delivering the goods). Knowing Dr. Agashe’s forthright views on umpteen universal issues like the limitations of clinical diagnosis, orchestrated corporatization of the medical profession and the significance of the patient’s mental makeup and socio-economic situation in palliative care, there was ample scope for voicing these concerns through the film – most fittingly through Dr. Prabhu (probably at the point when he refutes the daughter’s suspicion that her father’s forgetfulness is more garb than genuine.)

As for the elder daughter Ira’s predicament (the principal protagonist played by Irawati Harshe), the character’s initial appearances, save for the fact that she’s invariably busy in attending to the family’s diverse demands, neither reveal her deep-rooted bond with the father (and her supposed fluency in Sanskrit - a crucial factor that binds father-daughter together) nor her reservations about his ruthless regimen that has apparently distanced him from his wife (which we come to know about only through the mother’s death-bed soliloquy). Ira appears as detached as the others are. In fact the husband appears more concerned in most emergency situations. (Milind Soman is surprisingly convincing, never mind his queer Marathi accent)

That’s precisely why the confrontation between the two sisters claiming each other to be the professor’s favorite child, towards the end, barely scratches at the surface. There is no sufficient build up to even remotely suggest Ira's suppressed rage of many years - emanating from what she reckons as an unfair trial, that the responsibility of the father has been thrust on her while the younger sister has coolly shrugged off every burden with clinical precision rooted in cold logic. The sibling squabble hence seems covertly planted if not overtly put on. This is tragic since this is where Harshe finally seems to get real unlike the prior scenes where she is noticeably theatrical. Characters like Mrs. Gupte (Ila Bhate with her quintessential mannerisms) and the younger sister Rahi (Renuka Daftardar, a Bhave-Sukhtankar regular) add little to the film’s cause. Worse, Mrs. Gupte’s story adds a touch of cliché - wife suspecting husband’s rapport with his colleague, daughter affirming it in surprisingly unthinking fashion and predictably enough, Gupte spilling the beans towards the end to underline the professor’s devotion to his life work. The haziness of the character makes Gupte rather ill-equipped to elucidate the larger significance of the professor’s pet phrase “Astu Astu” for the benefit of the audience.

Cut to the Mahout’s family and the players disappoint to glory. Nachiket Purnapatre, though outwardly convincing as the elephant guy, clearly lacks depth in portraying the larger-than-life quandary when the professor accidentally steps into his life. Whether his inability to read the professor’s mind, perplexment over his bizarre ways or the persistent fear of the police, all come as perfunctory pronouncements. He could have done better in hinting at the figurative role of a ‘Mahamatra’. His wife Chenamma (Amruta Subhash, given her marked propensity for gaudy portrayals) makes all the crucial revelations, forming the film’s moot point, sound like overbearing sermons. Her Kannada accentuation and the contrived Marathi interpretation (more of a directorial flaw actually) are nauseatingly embellished.

Given the duo's obsession with the visual imagery of detached collages, most of the wrap-up scenes are flashed in a hurry with a few smacking of artifice – like the police interrogation en route the elephant hunt and the mahout's interaction with the priest - while others are scantily reeled – like Dr. Prabhu’s observations. All the elephant scenes stand out, thanks only to the astutely handheld camerawork that has amazingly captured emblematic scenes like the mammal’s bathing dip and afternoon siesta. The minimal music by Saket Kanetkar and Dhananjay Khawandikar is another redeeming highlight of the film, a delightfully non-intrusive undertone to the underlying theme.

To the film’s credit, it can play a vital role in helping doctors and care givers make priceless discoveries about patient traits and characteristics, far more effectively than what today’s Virtual Reality simulations claim, to discern the elusive day-to-day challenges of a degenerative disorder. Beyond doubt, no symposium lecture, academic paper or celebrity endorsement can ever hope to match the sanctity of the film’s earnest appeal to empathize with the subject matter devoid of any black and white inferences and thereby transcend the boundaries of scholastic knowledge which does little more than proclaim Alzheimer’s as a type of dementia.