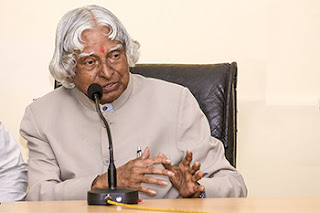 Remembering Avul Pakir Jainulabdeen Abdul Kalam as India's "Missile Man”, the highlight of many a conveniently condensed media tribute, overlooks his extraordinary talent and temperament that touched the lives of his fellow citizens in remarkably enduring and endearing ways. He was unarguably India’s most purposeful president ever who made a conventionally decorative position as decisive as possible with his humane and germane thought and practice.

Born into a Tamil middle-class household in the holy town of Rameswaram in Tamil Nadu, a young Kalam drew inspiration from all possible quarters. The mesmerizing sight of flying birds fuelled in him an ambition to become a pilot. From his devout parents he learnt the value of altruistic religion. Mr. Soloman of Schwartz High School in Ramanathapuram taught him how to put failure in perspective and from Father T.N Sequeira of St. Joseph’s College, Tiruchchirappalli; he discovered the hypnotic charm of English literature even as he pursued a scientific curriculum. Professor Sponser, KAV Pandalai, and Narasingha Rao sharpened Kalam’s acumen and ambition while he was studying aeronautical engineering at the MIT, helping him unravel the complexities of structural engineering, theoretical aerodynamics and mathematical physics. Back home, Dr. Neelakantan, director of the then DTD&P (Air) taught him the nitty gritty of developing combat aircraft models.

Thanks to the cumulative motivation, he went from strength to strength in his vocation. When an opportunity to become a fighter pilot eluded him, he found a new calling in Defense research, and eventually designed India’s first indigenous hovercraft and steered the country’s grandest-ever defense project - the Integrated Guided Missile Development Programme (IGMDP). His pioneering contribution during his ISRO stint made India a force to reckon with in space and satellite technology and he was also the key architect of India’s nuclear programme. And his offbeat endeavors were equally breathtaking – in writing poems, playing the Veena, growing plants, spending time with children or collaborating with eminent cardiologist Soma Raju to develop a cost-effective coronary stent, now immortalized as the ‘Kalam-Raju stent.’

Winning honorary doctorates from as many as 30 universities, he was the proud recipient of the Padma Bhushan in 1981, and Padma Vibhushan in 1990. Most deservingly, he was conferred India's highest civilian honour - the Bharat Ratna - in 1997. His crowning glory made him a befitting successor of K R Narayanan, and his democratic ways redefined the presidential position in ways that raised the bar for polity and governance. As India’s first president with a deep grassroots connect, he transformed Raisina Hill from a monumental museum for posterity into a public institution fostering activism and actionable change. While in office, he held back around 50 cases of capital sentences on humane grounds and had drawn up a fool-proof plan of illuminating Rashtrapati Bhavan with solar power, a dream that remained unfulfilled.

But no force could stop him from powering the shrine with the light of his vision which hopefully should help us build the India of his dreams, neatly articulated in his ‘Technology Vision 2020’ - a breathtaking blueprint to transform India into a developed nation on the wings of increased agricultural productivity, tech-empowered economic growth and easily accessible health care and education.

To keep us focused on the mission, what better inspiration than this verse which he narrated in Parliament: