To me, he seemed queer. We were neither friends, nor foes. There was some negative energy about him, I thought, that kept me away. All the same, he was exceptionally warm at times. During such moments, I felt like knowing more about him. I did make feeble attempts. But he had this uncanny habit of playing foul just when you thought all was fine. He was narrow-minded for sure, but at times, he even seemed vindictive. Precisely why, I never shared a drink with him ..despite his umpteen requests on desolate evenings.

We had quite a few heated arguments - work-related and otherwise. But our association,if not friendship,survived those high tides somehow. The place we worked for, many years ago, was downright messy - run by a self-procliamed messiah who was hired for his perceived wisdom. He loved his stardom instead. Not having the slightest idea of the dynamics of a software services organization, he simply tried to replicate the time-tested formulae of his past stints in manufacturing organisations. But more than this mismatch, it was his sheer arrogance that spelt doom for us...the kind of arrogance that comes with windfall authority.

All this while, my neither-friend-cum-nor-foe was the only one to predict the fate of the new regime. I dismissed his claims and focused my energies to serving the diktats of the new boss and his loyal brigade (handpicked from past organizations) I thought I was doing a great job in marketing communications - I even won accolades for few assignments. He still advised me I was in wrong hands. I presumed he was envious of my growing bond with the 'new guys'.

Then came the thud! One fine day, the new boss declared the "slowdown" has forced the company to rightsize its resources. This was, in fact, a ploy to justify the white elephants he had acquired across verticals at high prices. In a desperate attempt to convince his superiors and stakeholders in the US as also to save his own chair, he downsized few departments; marketing communications was one of them - which meant it was time to bid adieu to the organization. Having survived the wrath of my wayward career moves, such incidents normally do not bother me.I was quite prone to inviting situations of making new, abrupt beginnings, but this was the first time I was forced to do an encore. And worse, I was also battling with the demons of my mom's terminal cancer.I was badly shaken.

He had warned me throughout; more important, he seemed genuinely sad when he learnt that I was one of the many axed. He tried to help me out with options - when the guys I called my own - some from the CEO's loyalist gang - turned their backs, citing lame excuses. "Shall we go out for a drink", he offered again, probably to cheer me up, but I refused again.

Thanks to my hidden stars, I soon landed a plush job that restored my faith in life but I lost touch with him. A common acquaintance told me later that he had joined another organization and shifted base to the UK. That was his ultimate dream - settling abroad - and I was very happy for him, more in the light of the fag-end concern he showed for me. But fate had other plans for him...As if it was simply waiting for him to touch his dream.

One fateful day, I learnt he was back home in India, detected with spine cancer and had little time left. Before I could come to terms with the tragedy of his life, he was lost for ever.

Life's moved on as it does anyway, priorities have changed, what then seemed paramount now appears trivial....but whenever I think of him, I simply can't fathom the highs and lows of our short-lived association. I strongly feel I should have had a drink with him. In fact, several of them....

Siddharth, forgive me if you can!

From the archives - Hindi 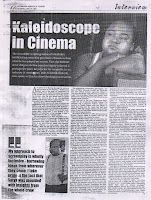 Dutt and Sanghvi took the phone call
And while they spoke, had quite a ball
Till the tap and the tapes
caused their low and mighty downfall