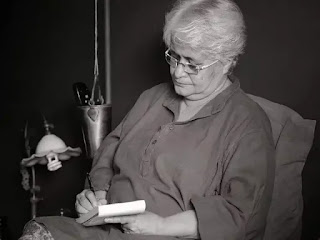 I met Sumitra Bhave at Dr. Kashinath Ghanekar Auditorium in Thane at the behest of Dr. Mohan Agashe. It was the screening of her film 'Astu', a film that lacks the Bhave touch we have learnt to take for granted. (More about it here: Elephant in the room)

Post the screening, we had a great time recounting the magic of her epic 'Vastupurush'. She seemed weary from age, but her enthusiasm, like most of her films, knew no bounds. Her creative partner Sunil Sukhtankar was discernibly guarded - typical of this tribe - but she seemed free of any baggage, as also claims of being a master filmmaker that she indeed was. Wish I had the opportunity to meet her again but that never happened. Her demise has deprived the pesticide-rich Marathi soil of a rare artist who could create a magic potion of art and activism with rare aplomb.

The other day, I was overjoyed to catch the soulful timbre of her voice - ironically born out of a voice impediment - in 'Court' fame Chaitanya Tamhane's 'Disciple', a whimsical take on a delightfully introspective theme that refuses to take off (and deserves a court-martial)

Going by the rich accolades and the litany of over-obliging reviews, his film will indeed travel the world over; he is already a merchant of Venice, courtesy the 2020 competition entry. Yet, the gloss of his product can't condone the lackadaisical and lazy effort, basking in the glory of its maker's offbeat stature. The film had so much to go for it - a competent singer-actor (hard to find), a purposeful spoof on the reality TV template organically etched to the protagonist's tale of all trials and no triumphs, and a few enduring frames of everyday conversations that convey more than the gaudy moments that Tamhane chooses to underline with hubristic authority.

Thankfully, Bhave's voice-over is a redeeming feature of this over-indulgent movie. If Tamhane truly cares for the given subject matter, we would urge him to make a biopic on the maverick Kumar Gandharva who exposed musical purists and modernists in the same breath, as also the high and mighty experts who make a living speaking and writing about music. Rich cinematic material there, befitting Tamhane's intrinsic talent, and a beckon of inspiration for aspirants who wish to walk the path that 'Disciple' claims to tread.