If you feel that the best home for a grand congregation of humor, pathos, passion, romance, suspense, intrigue, irony and inspiration is a classic film script or a best seller novel, think again! Any Warren Buffett communiqué gives you all of it along with a generous sprinkling of 24-carat life lessons.

His Golden anniversary letter to Berkshire shareholders is even more special probably given the hint of an imminent good bye. But trust Buffett and his confidant, consultant and comrade Charlie Munger to rejoice the future possibilities devoid of any narcissist sermons and egoistic riders that often unknowingly creep into a communication of this genre.

In a restrained yet rousing message, Buffett recounts Berkshire’s eventful past, revisits its glorious present and foresees its probable future with no trace of either wanton pride or embroidered prejudice. He begins the address with a candid recall - of his 1964 error of judgment when he impulsively rejected Berkshire Hathway chief Seabury Seaton’s purchase offer of 225,000 shares @ $11.375 per share, in what was a good 50 per cent higher than the cost of Buffett’s original purchase of Berkshire shares. This would have the best of his famous ‘cigar butt’ picks but he thought against it because Seaton’s offer was ‘eighth of a point less’ than his expectation of $11.50. Instead, he bought the Berkshire stock even more aggressively.

Seaton and Buffett both paid a heavy price, he informs us, for their ‘childish behavior’ (fretting and fuming over a eight of a point) – Seaton lost his job and Buffett was left with the ownership of a monumental textile headache – with a dramatically diminished net worth, zero cash and a fast approaching dead-end in the New England textile business. Buffett’s Berkshire-stricken fate was far from over though. He soon purchased a healthy insurance business out of Berkshire proceeds instead of his own Buffett Partnership Limited reserves, a decision that he regrets to this day and which needlessly locked up a lucrative insurance business in the claustrophobic cellar of a dead textile venture that was painfully co-owned with 36 per cent of the erstwhile Berkshire’s legacy shareholders. If this was not enough, Buffett acquired another dying fabric maker called Waumbec Mills in 1975 for its perceived synergies with Berkshire. Waumbec Mills breathed its last in due course but the acquired Berkshire miseries continued till 1985 (barring two years of decent operations and zero taxes only due to huge loss set-offs) until Buffett decided that enough is enough.

After this truthful submission, rare in any sphere of life, more so in the world of business and industry, Warren Buffett has the grace to laugh over it with a joke – “The northern textile industry is finally extinct. You need no longer panic if you hear that I’ve been spotted wandering around New England.”

That Warren Buffet of today is known for all the incredibly right reasons, and that he needs no introduction, automatically put his early failures in perspective. But sharing them in toto is Buffett’s way of inspiring all aspirants and wannabes spread across the globe to keep the flame of tenacious enterprise ablaze at all cost.  We can’t think of a more enduring package of motivational literature. Unlike the preachy sermons of many a business achiever (carefully edited in hindsight to reveal the glory and conceal the gory), Buffett’s words pierce the heart and the head in the right measure and potency.

In the pages that follow this formative account, Buffett narrates the phenomenal Berkshire story in inimitable style, never devoid of winsome wit, never bereft of wholesome wisdom.  He tells us how his friend, philosopher, guide Charlie Munger, a practicing lawyer and passionate architect, showed him the downside of his cigar butt theory for acquisitions of higher stakes and scales, how Charlie’s architectural blueprint designed the Berkshire of today that shifted the company’s operating tenet - from buying fair businesses at wonderful prices to buying wonderful businesses at fair prices, how Buffett learnt from experience and observation how most CEOs are oblivious of the obvious cardinal rule that ‘the intrinsic value of the shares you give in an acquisition must not be greater than the intrinsic value of the business you receive.’, how investment bankers,  accountants, consultants, lawyers and financial advisors lure you with acquisition-specific premium-to-market prices and attractive p/e multiples, how CEOs and their ever-obliging stooges have supernatural visions of ‘synergies’ even when they don’t exist, how imposing, media-savvy CEOs, enormously helped by imaginative accounting techniques, drive a golem-like conglomerate expansion spree of fundamentally weak bottom-fish mergers: designed to lure but destined to fail, how Berkshire’s structural advantages have kept it in good stead over the years: as a corporation with the ability and agility to move from sector to sector exactly in line with the prospects and value props of each and without the burden of huge incidental costs, taxes, vested interests and legacy biases.

More importantly, he highlights the fact how Berkshire has incisively exploited the stock market route to buy sizeable stock chunks of great businesses that prove more rewarding than outright business buyouts and have in fact funded some of Berkshire’s large acquisitions. Rather than scout for the limited opportunities of a single industry, Berkshire explores limited opportunities across sectors, consciously overlooking several better bets in the process.  For business owners desirous of sale, Berkshire offers a simulated home, he says, of retained culture and (most) people but with a new blueprint for growth. In the context of such sellers, Berkshire virtually has no competition, Buffett contends.

Under the head ‘The Next 50 Years at Berkshire’, Buffett strongly recommends a fresh Berkshire stock purchase only if the investor is willing to hold it for at last five years.  And he’s not in favor of using borrowed money for the purchase to safeguard against any steep fall that may not justify the leverage option. He advises all companies of ensuring - at all times - substantial and reliable earning streams, huge liquid assets and no significant immediate cash needs.

He foresees limited scope in percentage terms for long-term Berkshire gains from here on especially when compared to the progress report of the preceding 50 years. He estimates a time frame of a decade or two when the Berkshire directors would face a reinvestment dead-end of sorts and would have to choose between or both of the two routes of distributing excess earnings: dividend payouts and share repurchase.

In the conclusive paragraphs, Buffett clearly spells out the defining characteristics of the future Berkshire CEO. The CEO would:

In strongly defending Berkshire’s offbeat monolithic structure, (and ruling out the possibility of any voluntary spinoffs) Buffett clearly spells out its indisputable benefits – avoidance of duplication of costs owing from separate operations, nominal management costs in the form of a single board of directors and handy tax credits emanating from a remarkable web of subsidiaries.

Particularly noteworthy for mega corporates back home is the anti-bureaucracy people constitution at Berkshire. As a collective of large companies as opposed to a giant conglomerate, Berkshire headquarters are completely free of committees. Budgets are not an arid mandatory exercise, only a critical internal evaluation tool.  And no legal office here, nor human relations, public relations, investor relations, strategy or acquisitions that are often ‘taken-for-granted’ in most companies, only a super active audit function. Wish several Berkshire-like entities evolve in India in the time to come. ‘Make in India’ will gain traction and momentum at one go.

Priceless Buffett quotes interspersed in the letter:
“When we differ, Charlie usually ends the conversation by saying: “Warren, think it over and you’ll agree with me because you’re smart and I’m right.”

“Post mortems of acquisitions, in which reality is honestly compared to the original projections, are rare in American boardrooms. They should instead be standard practice.”

“If horses had controlled investment decisions, there would have been no auto industry.”

“In truth, “equity” is a dirty word for many private-equity buyers; what they love is debt. And, because debt is currently so inexpensive, these buyers can frequently pay top dollar. Later, the business will be resold, often to another leveraged buyer. In effect, the business becomes a piece of merchandise.”

“Mental “flexibility” of this sort (here, Buffet is pin pointing the brazen contrast in the typical banker’s pre and post acquisition advice) by the banking fraternity has prompted the saying that fees too often lead to transactions rather than transactions leading to fees.”

“Charlie told me long ago to never underestimate the man who overestimates himself.”

“Never forget that 2+2 will always equal 4. And when someone tells you how old-fashioned that math is --- zip up your wallet, take a vacation and come back in a few years to buy stocks at cheap prices.”

“Cash is to a business as oxygen is to an individual: never thought about when it is present, the only thing in mind when it is absent.”

“And if you can’t predict what tomorrow will bring, you must be prepared for whatever it does.”

“We will never play financial Russian roulette with the funds you’ve entrusted to us, even if the metaphorical gun has 100 chambers and only one bullet.”

Amid the widespread gloom and doom, Covid-19 has forced us to get rid of a few of our sticky beliefs, as also advised us to steer clear of pride and prejudice in everything we say, do, think, and preach. In these torrid times, when many of our constipated intellectuals - especially the Facebook journalists across all forms of media - are busy showcasing their Covid-enforced culinary skills and housekeeping hardships, the dreaded Corona virus has, in many ways, shattered the status quo for the better.

Many among the deprived are helping the privileged come to terms with the new way of life, mega corporations are learning from the ability and agility of startups, the developed nations have been rendered developing in many ways, and animals have, more than exposing our conditional love for pets, taught us wonderful life lessons in austerity, objectivity, earthy delight, and minimal expectations.

Rather than peddle muddled notions rooted in convenience and connivance, we must spend quality time with our kids to help them comprehend the depth and gravity of the exponential Covid crisis.

I had the opportunity to write a module on "exponents and exponential growth" for kids of primary schools. Sharing a few pages:

•      Quotient Rule = During division, exponents are unhappy with each other, so the one at the bottom is subtracted from the one at the top  for eg. am/bn = am-n

•      Power Rule = when the same base has one exponent which is in turn raised to another exponent, both decide to multiply  so (am)n = am*n

•      In exponents with different base and same power, the bases decide to share the power, so am * bm becomes (a*b)m  or am/bm becomes (a/b)m

Story of a mighty demon

A mighty demon is creating havoc, thanks to a boon he received from a Rishi. Whenever he is killed in combat, he not only regains life but grows into three demons. If he is killed once every day, how many demons will be created on the fourth day? 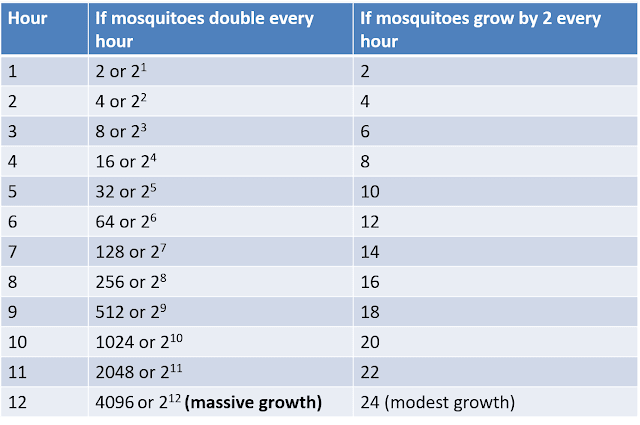