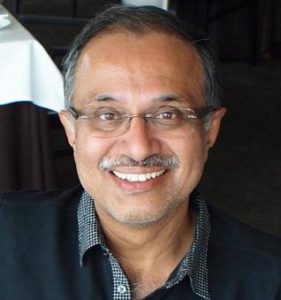 
More about him at
https://ramramaswamy.org/


In the Homi Jehangir Bhabha (HJB) vs D D Kosambi (DDK) tussle, a supremely talented, definitively democratic and readily disagreeable personality was terminally
sidelined, and our elitist nuclear ambition caused a solar eclipse
that has cost us dear. Do you agree?

At the time when DDK and HJB were disagreeing about energy sources
(around 1958-1960), harvesting solar energy was not simple. Silicon
technology was many years into the future. All known routes involved
rare elements like Ruthenium. As an idea, solar was great, but it was
not practical. What we see today is that DDK's instinct was right, but
it was much more important for HJB to set up the Department of Atomic
Energy, etc. DDK's disagreeableness was only part of the story.


How did the idea of presenting and elucidating DDK's mathematical
treasure trove to people at large germinate in your mind? Did
mathematics lead you to DDK or was it the other way round?

As I mentioned in the book, the original push came from Prof. Romila
Thapar who only knew of DDK's contributions to History. I had heard of
him first as a student in IIT Kanpur around 1973, and at TIFR where I
spent a few years, mainly in the context of mathematics. One thing led
to another, and I decided to at least collect his maths and look at
how he moved from one area to the other.


Twenty four papers each with a commentary and key technical review
extracts - the structure is God sent for someone who wishes to put
Kosambi in perspective in optimal time.

The total number of maths papers of DDK is about 70 (give or take). I
also realized that most people would not be interested in all the
maths papers, just the ones that had a historical or mathematical
significance. Once I decided that, the choices were mainly clear. The
first paper. The Bourbaki paper. The paper that started the
numismatics. The Kosambi distance. The paper with Cartan. The
orthogonal decomposition. The Riemann paper, etc.


I must inevitably turn to DDK's controversial approach to the
Riemann hypothesis. Notwithstanding the embarrassment rooted in what
most term as a monumental blunder, I learn that he had made it amply
clear that his work based on Tauberian theorems was only a conditional
proof ("if the primes in suitably defined covering intervals behave
like an unbiased random sample, then the Riemann hypothesis follows")

"Amply" is overstating the case. No self-respecting mathematician
would have published these papers. If you discover that if A is true,
then B would be true, but you cannot prove A is true, then you really
are left nowhere. It would have been more mature to say something like
"Ah, I have discovered that B would follow if the following statement
A is true, but I have no way of proving A, unfortunately ..." If you
read my essay "A Scholar in his time" you will see that a posthumous
review of this work says that effectively Kosambi replaced the Riemann
Hypothesis by an even more involved hypothesis that the reviewer
proposed to call the Kosambi Hypothesis. DDK himself (in his essay
Adventure into the Unknown) tries to make it out that he was "a
maverick who could not fit into the scheme of things" but the argument
does not fly.


Continuing the same thread, while Kosambi’s 'Agricultural sciences'
prank does seem bizarre, could it be that his detractors pounced on
the opportunity to defame DDK, also burying the prospective worth of
his paper, and the possibilities inherent in it.


I don't call it a prank. No serious mathematician does that,
especially not one who has position at TIFR.


I would also love to know your thoughts on his practice-driven work
– for instance the Proper Orthogonal Decomposition analysis and the
study of seasonal death rates that advocated proactive anti-typhoid
work to avert an epidemic. I am sure he would have done something
about  the corona scare as well, had he been in our midst.


I'm sure that he would be out there collecting data, and the fact that
Pune is a major centre would probably enthuse him no end! He was an
intensely practical man, but his interests were many and time was at a
premium. So he flitted into many areas and did not complete his work
or follow it up in many cases.   It is clear, for instance, that he
constructed the Kosmagraph at St Xavier College, but nobody else has
written about it so we have no other validation. Both his books have
been lost, one of them in 1946 and one in 1966. No copies were kept?
Why? All this makes for a very confusing image of a very intelligent
person who could not keep a sustained interest in most things.

How would you summarize DDK's work concerning "Law of large
numbers"? I am keen to know about your thoughts given the applications
of this intuitive law in AI.


The LLN paper is an expository paper in Mathematics Student in which
he basically explains this law (as a way of understanding it himself,
no doubt). There is little that is original in the paper, except
perhaps the presentation.

I believe you have consulted C D Deshmukh’s book for biographical
information (indeed a delightfully detached account of Kosambi’s life
and work) Hope the translation has done justice to the original.


I don't read Marathi, so I wouldn't know how the translation works! I
got a fair amount of information from Meera Kosambi also.

Those who love to plead ignorance...
with staple expressions of shock and surprise
and the standard submission "Oh, I was not aware!"

are visibly happy in the cocoon of their pretence
relishing the litany of fake acts, one after another ...
of dramatic disbelief and theatrical sighs
at developments they follow by the minute

That mounting age helps us look beyond
is only a fabled myth
It only ferments our desperation
and immortalizes old habits
which never die, hard or otherwise.

If one is ready to brave, more than bear, the excruciating pain of constant familial and social ridicule, especially the one layered with virulent disdain and septic contempt, the exhilarating gain of transforming offbeat paths into beaten tracks knows no bounds.

Thanks to the arid, bureaucratic mechanisms of conventional NGO bodies, proletariat activists and CSR practitioners across the globe, social responsibility, knowingly and unknowingly, has come to harbor several blatant assumptions about the larger cause of end-beneficiaries (often generically slotted as ‘target groups’ or ‘deprived’ communities) Overlooking the fact that deprivation is only circumstantial and in no way indicative of the instinctive and intellectual capacities inherent within the community, the supply-side forces rush to emancipate the downtrodden, and sadly, they are themselves rendered deprived. Busy peddling jargon-heavy black and white prescriptions, they are unable to spot playful smiles behind suppressed yawns that the ‘deprived’ reserve for the  ‘privileged’, led by doubt more than disbelief.

My workshop intervention programs have been a mixed bag of trials and triumphs, including both dazzling success stories and dismal failures. Since I have never felt the need to showcase my "track record", the outcomes of these interventions hardly guide the future course of action. Shrugging off every disappointment and steering clear of dangerous assumptions following every accomplishment, I march on barefoot, unearthing profound truths following every interaction with the target audiences, who more often than not are kids. 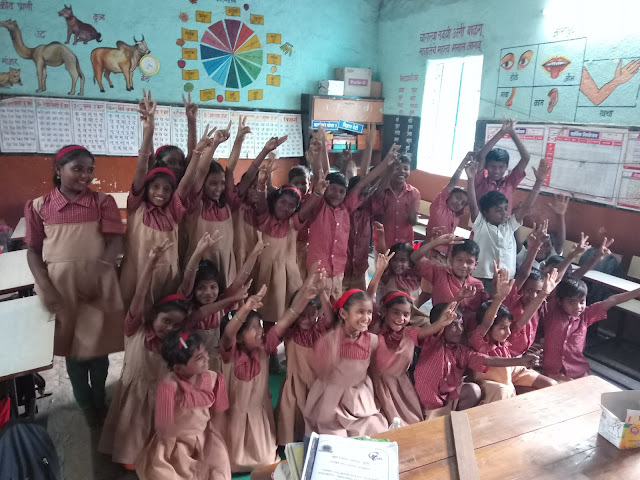 2019 was an year of scintillating discoveries. Thanks to the prompt help of activist Rahul Shende (who runs an NGO called Urmee in Pune), I was introduced to a few ZP schools in and around the vicinity of Pune.

After a few horrifying 'experiences' with blatantly conniving teachers, highly suspect managements and stone-faced government authorities, I finally gatecrashed into a ZP primary school nestled in the lap of rustic environs, exuding an elusive charm that one can sense from afar. The motive was to directly interact with the teachers and students and try to gauge any need for enablement in some form or the other. The head mistress was low on comprehension but very high on compassion. Rahul took the responsibility of paper work (the usual application letter with photocopies that eventually rest (read rust) in peace in some godforsaken store room) and the headmistress helped expedite the "approval" from the higher-ups. 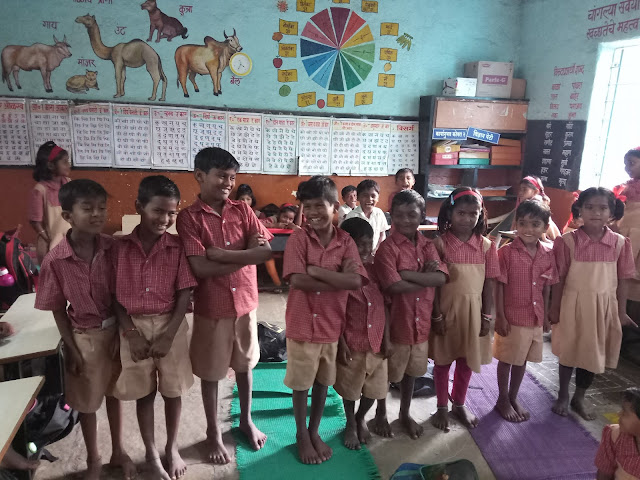 Luckily, all 'mandatory' things fell in place and I landed at the school one fine day, ready to mingle with the cheerful students of class I, II, III and IV, all seated in one spacious classroom.

In a month's time, many of them - Kartik, Karan, Megha, Arjun, Kartiki, Aarti, Sanskar and Saima   among others - showed exceptional grit and gumption to absorb the umpteen freewheeling lessons on Math, Science, English, Sanskrit and General Knowledge that came their way without warning. Mind you, these are the kids of nomadic brick klin workers, seeped in abject poverty and alarming deprivation. Yet, the self-springing resolve that a few students showed should be enough to inspire the whole nation towards positive thought and action. 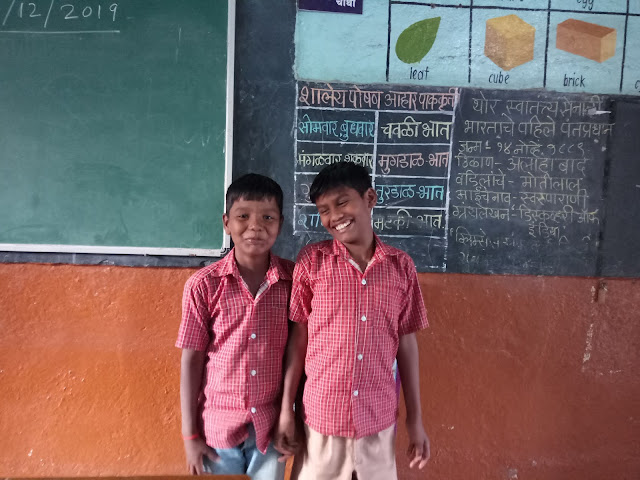 Meet Kartik (right) the wonder boy from standard IV, a pro at picking up the right accent and intonation. He feels at home with both words and numbers and can now comprehend the logic underlying Pascal's Law. He can recite a poetic proverb in chaste Sanskrit (leaving no trace of  his native twang) and he understands the essence and credence of the famous Einstein's Riddle.

To his left is Sumeet, a confirmed brat, who was quick to sense the need to be with Kartik in the snap. The native urge to mingle with a superior mate is earthy intelligence that invariably fuels progression. Hats off to Sumeet as well! India needs both Kartik and Sumeet to pave the way forward in this era of artificial intelligence.