Thanks for the overflowing feedback from across the globe on this thought piece. But it's not this two-penny review, neither Gabriel's writing, nor Naseer's performance that guarantees instant readership and viewership - it's the timeless charisma and credence of the one and only Albert Einstein...we all have so much to learn from him...

Naseeruddin Shah's performance is a glowing tribute to the self-effacing genius of Einstein and the profound ingenuity of playwright Gabriel Emanuel in highlighting the relativity of the umpteen trials and triumphs that shaped the momentous life of the legendary scientist, feels Sudhir Raikar. (Read online at https://www.indiainfoline.com/article/lifestyle-art-approach/relativity-at-play-114111800146_1.html) 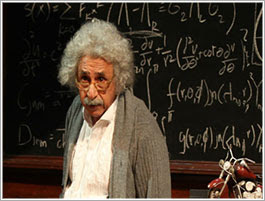 Motley's 'Einstein', the first credible performance of Gabriel Emanuel's landmark play in India, has seen accomplished actors like Peter Boretski, Chris Brittain, Patricio Castillo, Nishin Sharim Paz, Carlos Palma and Victor Attar playing the legendary scientist ever since it was premiered in Canada way back in 1985. Given its dated and decorated existence, it was never easy to carve out another exclusively believable performance notwithstanding Naseer's striking physical resemblance to Einstein. But, thanks to his studied approach - an intricate mix of discipline and discretion, intuition and insight, effort and facility - Einstein comes alive on stage through an engaging monologue with his audience. The way he's relished underlining the scientist's diverse emotions - delight, despondency, reminiscence, regret, fear, fulfillment, belief, bewilderment, guilt, gullibility - it's pretty apparent that Emanuel's perceptive script has generously helped Naseer's cause, a luxury he's seldom enjoyed in his chequered film career.

Emanuel has thoughtfully handpicked both popular and lesser known drama-laden events from the scientist's life to create a wholesome package - nostalgic waves from a rather obscure childhood, academic trials and tribulations, early years of employment, multi-hued challenges of marital life, sparkling moments of professional glory, amusement emanating from his celebrity status, his undying love for music, the nonconformity of his faith, and the tug of war between the pull of his pacifist ideals and the circumstantial push of atomic advancement. Ensuring that the crux of Einstein's contribution is not compromised in the attention to the human dimension, we have the protagonist lucidly elucidating the theory of relativity through his famed 'train and lightning' example as also a vivid demonstration with the help of volunteers from the audience.

Naseer has always won rave reviews for his acting in theatre and films, more like a customary salute reserved for the unanimously revered than any studied appreciation of his craft, like how the film industry extends its perfunctory allegiance to Dada Saheb Phalke at ceremonial events. Watching him play Einstein is a highly rewarding experience provided one cares to look beyond his peripheral Jewish features and the much-talked about likeness to the scientist. Note how he recreates sumptuous slices of history as the 70-year old physicist speaking to us from the cosy confines of his Princeton study (adorned with all the scientific essentials including a table, violin, typewriter, blackboard etched with numerous equations, plethora of books and Mozart playing in the background) - now assuming the role of Uncle Jacob rendering playful Algebra lessons to a young Albert, now turning into the stiff school teacher admonishing the student Einstein for his unduly probing curiosity... one moment rendering a honeyed apology to Newton's sculpture for having disproved his gravity theory, the next moment calling for Helen, his secretary-cum-housekeeper, in utter desperation...One can't but marvel at his finesse in accentuating Einstein's emblematic forgetfulness and marked aversion for an elaborate attire. Whether looking for the misplaced violin bow or displaying the discomfort of freeing his sockless feet from the clutches of his shoes, there's no superfluous emphasis on animation whatsoever. And his reflective utterances of the celebrated Einstein aphorisms (with a delightful German twang) are a case study in effortless acting. You have heard them all before, yet you relish them like they're coming from the horse's mouth for your exclusive benefit. The Motley crew - Shruti Gupte's set design, Jairaj Patil's soothing 'Eine kleine Nachtmusik', Arghya Lahiri's astute lighting, Adhiraj Bose's non-intrusive slide presentation, functional costumes of John Davies and Prakash Laad's simple makeup - deserve special mention for creating a minimal, matter-of-fact environment for the maestro to move around in gay abandon.

Some of our hallowed critics who find the play overtly simplistic or unduly sympathetic (or both) should attempt an independent play on Einstein or play him instead. Either endeavour will help them recognise the futility of their simplistic conclusions and will, in turn, leave them yearning for a sympathetic review. Bringing Einstein on stage was such a tight rope walk, calling for a judicious blend of entertainment and edification as also its competent portrayal....Had the writer tilted either way more than necessary, the play could have either degenerated into a theatrical caricature or reduced to an arid academic representation. Note how Emanuel highlights Einstein's dislike for the rigidity of conventional education through the word "kadavergehorzamkheit" (obedience of the corpse). Einstein used it in the context of the rules and regimentation that intended to turn the subject into a mindless, obedient corpse. Given the fluidity of the script and the excellent rendition by Naseer, the reference doesn't end up becoming a wordy affair. And the desperate manner in which Germany has rediscovered and reclaimed Einstein in recent times only highlights the poignancy of Einstein's life story, so very beautifully expressed in Emanuel's creation. Call it sympathetic if you like but the fact remains.

While we feel the audience involvement as volunteers is a great idea, it runs the risk of fanning the inherent desire of many craving for their moment of glory which could disturb the play's conviction if not dilute it. If Einstein's frisky remark 'You remind me of my first wife' prompts a needless response from the other side as it did on one occasion, it only ends up trivializing the story of Einstein. As it is, for a large part of the audience, watching a play like Einstein is more a staged exhibition of their 'intellectual' propensities than an earnest desire to know the scientist better. It should come as no surprise if they pounce on anything that even remotely sounds frivolous.

One felt, with Einstein at his reflective best in the play, it would have been apt to include at least a passing reference of his heartfelt correspondence with and reverence for Mahatma Gandhi as also his historic Berlin interaction with Rabindranath Tagore, both facts as momentous as his tete-a-tete with Charlie Chaplin. No wonder one of Einstein's relations Dimitri Marianoff had described the Einstein-Tagore conversation ''as though two planets were engaged in a chat.'' 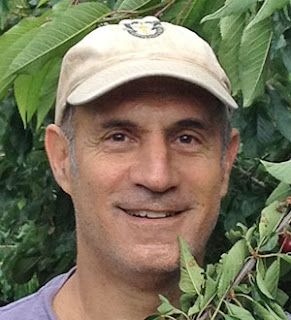 A tete-a-tete with the playwright, Canadian Gabriel Emanuel, co-founder of the Israel-based Nephesh Theatre Company and an accomplished poet.

How and when did the idea of the play germinate in your mind?

I was in my 3rd and final year of law school in Kingston, Ontario. I was bored and had long since attended any classes. I woke up one morning and looked up at a poster of the famous physicist which hung on my wall. I realized at that moment that I knew absolutely nothing about science and yet was fascinated by the allure of Einstein's aura. I was determined to educate the other side of my brain and decided to start by reading about Einstein. Needless to say I did not get very far in the world of physics but was captivated by the drama in Einstein's life.

What were the key challenges you faced in the theatrical representation of a genius known the world over for his scientific and philosophical work?

I had to make it fun! May not seem like a simple task to make scientific formulas come alive on stage yet I realized early on that would be the key to holding the audience - and, indeed, the aspect which excited Einstein from his youth. And so we have a live demonstration of relativity in the play - with the help of volunteers from the audience - and a good time is had by all!

Did you base your play on any book or published work about the scientist?

I dedicated a year to research - anything I could get my hands on as far as biographies and papers that Einstein himself had written. Less pure science and more his interaction with the world around him, politics, religion, peace and war, for example.

Your thoughts on Naseeruddin Shah as Einstein...

I've been blessed with many productions in many languages - English, Spanish, Portuguese and Hebrew to name a few. It's an incredible treat to experience the many varied talents that brilliant actors such as India's Naseeruddin Shah bring to their portrayal of Albert Einstein. I am very much looking forward to India's Einstein. From the photographs, I have seen he already bears an amazing likeness.