IIFL | Mumbai | October 01, 2015 10:38 IST
For the three founder-musketeers of Sapnagroup - Nilesh Nayak, Jonny Hübner and Anurag Jain - innovation is the new norm. Their dream venture defies all convention with matter-of-fact precision and yet doesn’t dislodge the beauty of tradition in any way. Sudhir Raikar spoke to co-founder Nilesh Nayak on the past, present and future of the remarkable Anglo-Indian firm. 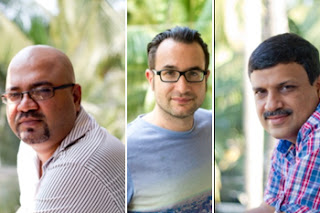 The tourist haven of Goa, we all know, is the ultimate destination for a dream vacation. That it can also turn out to be the perfect location for a dream vocation would surely be considered unusual, thanks to the conformist image of the idyllic place. But then, for the three founder-musketeers of Sapnagroup – badminton enthusiast Nilesh Nayak, Marathon aficionado Jonny Hübner and professional photographer Anurag Jain - innovation is the new norm. Their web development venture defies all convention – whether by virtue of its offbeat name or its distinctive modus operandi - and yet doesn’t dislodge the beauty of tradition in any way. Their fascinating software development story will make even hard-core skeptics agree profusely.

Sapnagroup’s genesis dates back to an IT outsourcing company that Nayak, a BTech from IIT Madras and MBA from XLRI, Jamshedpur, incepted in his hometown of Goa. Jain, a B E from PCCE, Goa, joined him soon after. In due course, their firm grew in scope, if not immediately in size, and they began taking on overseas projects. In the course of their exploration to source more business, an ad on freelancers.net caught their attention. It was posted by Hübner, then employed with a UK firm called Orbit24-7, who was scouting for someone to replace one of his programmers who had vanished into thin air without notice. Though he was looking for a UK-based resource, Nayak proposed the outsourcing route. It took loads of hard sell besides a free pilot project to convince Hübner of the merits of the offshore development model and the initial reservations soon made way for an enduring relationship although Orbit24-7 wound up in a mere three months post the contract. When Hübner decided to set up his venture, he offered his new-found Indian comrades exclusive charge of the development team. The duo from Goa obliged and over a period of time, the brand was rechristened Sapnagroup. Sapna, the name of Nayak’s daughter, means Dream which amply symbolizes the group’s aspiration, so felt the trio in unison.

But how did the geographical presence span three idyllic of India, UK and Germany respectively – viz. Goa, Reigate and Bamberg? Explains Nayak, “I was born and brought up in Goa, and Anurag is based here too. So it made sense to give back something to the home state. Jonny hails from Bamberg, Germany, so he moved back to his roots. It also saved him the astronomical costs of operating from London, which proved a burden when we started. He now commutes to the UK once in a month and has a base in Reigate, the historic Surrey town. It was a question of convenience.”

In the process, Sapnagroup more than proved that you don’t necessarily have to be based in Bangalore, Noida or Pune or even Silicon Valley for doing world-class software development. The group currently serves markets in Europe, Middle East and South Africa. The bulk of their clients are in UK and Germany, primarily because Jonny is based there and does the sales. They also serve a few customers in Austria and US apart from those in Middle East and South Africa. Among the group’s sterling website management and maintenance case studies are www.myfamilycare.co.uk, one of UK's largest childcare companies, www.verbatim.com, a Mitsubishi company having intricate, multi-lingual European and American websites and www.weltkulturerbelauf.de, a Bamberg marathon which happens once in two years, and causes sudden spurt in website users when registrations are opened. What about India? “Till date, they haven't undertaken any major project in India but are looking forward to startup opportunities in India now”, informs Nayak. 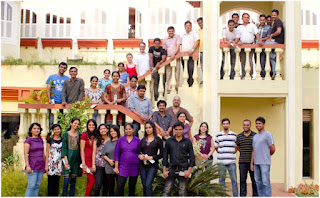 The company’s web development service spectrum includes LAMP development, SEO/SEM, server administration and mobile App development. Typically, how are the group’s client engagements - do they end up providing all stack services for a client or are the projects singular in nature? Nayak elucidates, “There is no thumb rule. Our server hosting and SEO originated because our existing clients needed these services. Most of our client sites are hosted by us. Many of our SEO clients become our programming clients. Typically, we get most of our projects through word of mouth referrals, or led by expansion of our existing clients and in some cases, on the recommendation of an ex-employee of one of our clients to his/her new employer.”

Does the choice of LAMP emanate from the founders' prior competence on based on an inherent belief in open source development? “We started in PHP by default, possibly also because it was free compared to equivalent Microsoft technology which was paid. But as we went along, the open source nature also helped us and today we endorse it very strongly. We have done some work in Perl and Python too and are definitely open to any other variants. In fact, we have started doing app development for IOS and Android.” Nayak reveals.

Sapnagroup has built a team of over 40 people in India who ensure that clients across the globe are happy with the service. What’s the approach to training and development of developers? “We make all freshers undergo on the job training which effectively means we put them on small tasks. We have a small training system also developed to help them learn things which are specific to professional programming as also terminologies relevant to UK and Germany. Most of our code is customized and hence we have developed our own frameworks. We do use frameworks like Yii when clients insist. We are already working on JSON and JS MVC frameworks. Some of my colleagues have such a good understanding of technology that they can put European programmers to shame. And mind you, all of them are from Goa, from local colleges like Xavier's, Dhempe, GEC, PCCE and the like.” 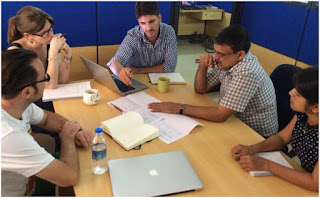 Why has the company consciously kept away from design and consulting as also the enterprise space? Are they open to the SAAS route given their penchant for tools? “Design is something we tried with an in-house designer in Europe but it didn’t work out. We have strategic tie ups with agencies in Europe for specific design work. As of now, we have no plans to get into design as most of the core promoters are not from that area and unlike programming, design is a more subjective area. Yes, we are open to consulting should there be an opportunity. SAAS model is a little risky hence we have stayed away from it but maybe we could look at it as we grow.”

Among the most notable features of Sapnagroup is its genuinely democratic and lightweight setup – the team is virtually free of hierarchy and you won’t find the customary support heads for HR, Marketing and Corp Communication here. Nayak contends with a staple matter-of-fact tonality, “We are too small for these departments. Jonny handles the sales and client interaction; I am the chief architect of the development team Anurag is the Chief Technology Officer, head of server team and key security consultant. I personally look after HR, so in theory we do have an HR department (with home-grown HR software to handle leave and payroll). Marketing is Jonny’s baby but given our model, we don't unduly depend on it. As we expand further, we will definitely need to strengthen that front. We span three offices in Goa already and as and when we grow further, more formal systems will need to be put in place. Right now, we are able to manage everything within our internal resources and some bank borrowings but if we get a very fast growth trajectory, we may need to look at other sources of funding”

Nestled in the lap of Goa, Sapnagroup is doing world-class open source web development with the help of native talent for a growing universe of global clients, in an indigenous fashion that lends meaning and substance to the clarion call of “Make in India”, and without staking a claim to that effect. Nayak's insights surely put him in a different league of visionary entrepreneurs. Consider this heart-felt plea that speaks volumes of his sterling conviction: "We are trying to build something substantial here. I would request you not to look at this company as a run of the mill IT shop.A software company in Goa gives the impression of a small time unit doing websites or VB applications for local industries. We need to get out of this stereotype. The internet makes it possible to develop world-class software from anywhere on the globe. Fifteen years back, a US citizen would have viewed an IT company in India with the same stereotype; today he/she views an Indian as a czar of the IT world (though I personally don't believe Indians have become more intelligent in 15 years)"

The group is open to collaboration with like-minded entities – whether ad agencies, individual consultants and even companies. Should you want to know more or wish to check out their in-house tools for Design Match and Encrypted Transfer, do visit http://www.sapnagroup.com/ Whether you engage with it or not, you will find the idyllic route of Bamberg to Goa via Reigate undoubtedly engaging.