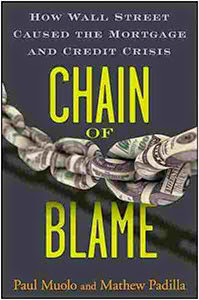 | Mumbai | January 14, 2015 16:29 IST
Chain of Blame, a scrupulous sketch of the American subprime crisis by journalists Paul Muollo and Matthew Padilla, may have become passé in the context of its publication date but remains more than relevant in its observations that greed can get the better of even the very best minds in business.
- Courtesy: http://www.indiainfoline.com/article/lifestyle-book-review/architects-of-armageddon-115011400369_1.html#sthash.ImPLtApe.dpuf

Chain of blame, beyond doubt, is a good resource on the American subprime housing mortgage breakdown. The authors do a very good job of sketching the tumultuous history of the subprime market but hinge rather heavily on the rise and fall saga of Angelo Mozillo (fondly called ‘Tangelo’), co-founder, chairman and CEO of Countrywide Financial and the intriguing tale of philanthropist and Ameriquest Mortgage founder Late Roland Arnall.

Narrated like a film script, the book recalls the horror in the making years spanning the first decade of the 21st century – how top-notch financial institutions were bowled over by the hypnotic charm of subprime lending, how home financing risks scaled new heights with zooming home prices, how prudence unanimously became a bad word, how liar loans became unbelievably popular and low-doc and no-doc became everyday parlance in real estate lexicon and how Wall Street ‘bonded’ with the mania thereby spreading the doomed virus to non-US shores including Europe, Asia and Australia. The conclusion was foregone but far from foreseen. Falling real estate prices broke the very back of the financial world which came face to face with a self-engineered Armageddon.

The duo’s screenplay sounds a tad overdone at times. If the intention was to adopt the style of a racy novel, the outcome is clearly off the mark. Consider this uncalled-for verbosity, one of the many spread across the pages:

“He was dressed in a dark gray suit, and was wearing a white shirt with a blue collar and a red tie. It was the kind of shirt that investment bankers wore when they appeared on CNBC (FNN) to discuss the vicissitudes of the stock market. Later on I would learn that Angelo was none too fond of investment bankers, though he did like the shirts they wore. (He also was a big fan of CNBC.)”

The best part of the book is its lucid elucidation of cryptic financial jargon, undoubtedly the biggest value-add for an everyday reader. The fag-end glossary is exhaustive and painstakingly illuminated. Very few financial books would bother to explain the meaning and significance of loaded terms like Collateralized Debt Obligation or Structured Investment Vehicle.

The duo, however, misses a few key contextual points in the single-minded pursuit of drawing their own conclusions as also the occasional temptation to trivialize the moot point. A case in point: “American teenagers were now using subprime as a verb to describe screwing up, doing something bad. As Sherry Muolo, the 13 - year - old daughter of co - author Paul Muolo, once put it, “I’d better not subprime that test.”

Surprisingly, there’s no mention of Fed Reserve’s 15th chair Janet Yellen’s 600-pound Gorilla 2007 premonition which had been dismissed outright at that time. It was also disappointing to find no mention of Raghuram Rajan, who had predicted the 2008 crisis three years before doomsday (and devoid of the vanity of a financial soothsayer, Paul and Matt, please take note) inviting the then Fed boss Alan Greenspan’s wrath in the process. Nobody has put the crisis in perspective like Rajan has in his incisive account ‘Fault Lines’ wherein he points out that avaricious bankers, dishonest home buyers and reckless investment managers were only responding to three sets of fault lines: domestic political pressures, trade imbalances and incompatible financial systems.

Rajan’s argument, as also his advice, deserves attention, more than mere mention:
“I buy the AAA tranche of a CDO, not because I am confused by the rating, but because I am selling a deep, out of the money put option, which will give me a steady return most of the time, but default with serious adverse consequences occasionally. By the time it defaults, I have hopefully made my money and am enjoying my own private beach in the Bahamas. A number of managers including Stan O Neill of Merrill Lynch did generate higher returns for their firms for some time, but alas we now realize it was hidden risk. Of course, his parting compensation did nothing to dissuade the rest of the flock from following his example in the future. The broader point I am making is that we need to think about incentives of financial market participants as an important factor in the current crisis. How to improve those incentives will, no doubt, be an important issue for discussion in the years to come.”