Ganapat Dattatreya Sahasrabuddhe, better known as Das Ganu Maharaj, was a gifted poet, prolific kirtankaar and biographer of proven authority. His principle works are devoted to his spiritual master Sai Baba of Shirdi who was solely instrumental in Das Ganu’s transcendental transformation from a naïve tamasgir to a seasoned kirtankaar.

A police constable by profession, Das Ganu also wrote several engaging biographies of many a saint in colloquial Marathi, the language of the masses in Maharashtra. One among these is his consummate Charitra based on the life and times of Saint Gajanan Maharaj of Shegaon, an avaliya free-willed saint of the Digambar tradition (1878 - 1910). Comprised of 21 chapters, the epic biography is a dexterous embroidery of 3668 ovis (lines of poetic cadence).

Conventionally, any religious text is conveniently regarded as a detached faction of the literary movement, exempt from the principles that govern aesthetic writing, prose and verse included. But Das Ganu’s superlative effort is simple, lucid, aesthetic and edifying all in the same breath, a sublime work that sits on the cusp of prose and verse, laden with all the qualities of enduring literature. Artistic and evocative in expression, its permanence is epitomized by the work's luminous universality and the author's sinuous style.

Rich in metaphorical splendour, the lyrical ovis take us through the times touching upon several social,political, economic and cultural facets of public life that provide a much larger context to Gajanan Maharaj’s essence and enormity as a non-conformist deity in human form. Each chapter begins with humble salutations to the Supreme to bless the endeavor with the tenacity to complete the divine task. His humility is awe-inspiring and sincerity worthy of emulation, especially by our post-modern writers who seek instant gratification, often at the cost of the detachment and self-effacement that literature demands way ahead of competence and credentials.

I have humbly undertaken an English translation of the original Marathi work which in no way makes any claim of reproduction, exact or otherwise. It’s only a sincere effort to convey a fair idea of the poise and perfection of Das Ganu’s pen and penance to those who wish to be pulled by interest, not pushed by instruction.I sincerely hope to be blessed with the courage and conviction needed to take the mission to its fruition, especially in an era where religion and pragmatism are deliberately seen as antonyms, making all believers needlessly apologetic about their religious and spiritual heritage.

This effort is dedicated to my mother who transformed my life by making me an ardent devotee of Gajanan Maharaj from an impressionable age, and the Gajanan Math of Belgaum where I first learnt about the inspiring life story of Shri Das Ganu Maharaj.

At the foothills of Arunachala 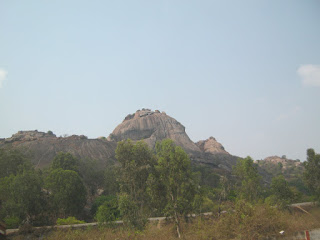 A business trip to Puducherry (or Pondicherry) took us to Ramanashram - the karma-bhoomi of Bhagwan Ramana Maharshi. Visiting the ashram was one divine experience, truly unforgettable. The new prayer hall and the Samadhi sthal in particular get you in a trance of sorts - just imagining how the place would have been in Maharshi's times. His room is well maintained, complete with bed, belongings and other artefacts of the room. My limited knowledge of Ramana chiefly emanates from the pioneering book "Self Realization - the life and teachings of Sri Ramana Maharshi" by B V Narasimha Swami, noted lawyer and scholar of yore.

Such is the flowing account of the book that the actual walk round the holy place seemed akin to a recalled experience of a past visit. I collected two rare books on Kavya Kantha Ganapati Muni, Maharshi's ardent disciple and illustrious Sanskrit scholar.

The ashram library is simply awesome, not only for its diverse collection but the discipline and decorum with which things go about here. Worthy of adulation and emulation in the same breath.

Unfortunately, the scene outside the ashram leaves much to be desired. Stench, if not filth, is a common feature of the town which solely thrives on the legend, much like Shirdi and Shegaon. Fancy commercial outlets have made a divine mess of the place with all kinds of Maharshi merchandise displayed from wherever possible. To make matters worse, rash drivers of buses, taxis and rickshaws seem all set to ride over you at any moment of the day. Luckily, our visit was during the off season (or half-season as the resort guy told us) else, life would have been more chaotic. Thank god for that!

Now, we don't expect people at such places to be blessed with halos of enlightenment round their heads but why should even the basic civic sense be amiss is truly baffling. Clearly a tragedy for a town that was sanctified by the great Maharshi years ago, who traveled all the way from Madurai to reach this place before he set foot on the Arunachala Hill. In fact, the Maharshi had to make a long detour as he was unaware of the Villupuram - Tiruvannamalai - Katpadi branch railway line opened in 1892. He went by the Madurai - Egmore track on August 29, 1896 which showed Tindivanam as the nearest point to reach Tiruvannamali. Thanks to a co-passenger's prompt advice, a Moulavi who was eager to help the 'young tapasvi', he alighted at Villupuram and after much hardship, bought a ticket to Mambalapattu. From Mambalapattu, he walked all the way to Kilur, yet twenty miles away from the destination. Here,he pledged his earrings to secure a railway ticket to Tiruvannamalai and finally arrived here on the historic day of September 1, 1896 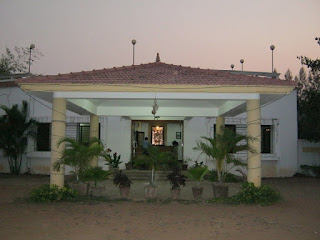 Back to our insignificant slice of history. Luckily, the Arunai Anantha Resort was just the place one looks for in a religious township. Clean and hygenic, it proved reassuring despite no frills whatsoever to entice its guests. The noon Thali however, was a real treat. Much to our surprise, it also included a couple of delicious chapatis apart from the usual tempting fare of sambar, rice, payasam, rasam and staple vegetables.

A firang couple made their way into the canteen immediately after us. Their conversation with the receptionist-cum-cashier-cum-attendant seemed endless...but entertaining nonetheless. Like the thali, it went round and round:
Firang guy: "Lunch?"

Attendant: "No fry, only Daal... in thali" (this time sans the 'merry go round')

Firang guy and gal in unison (as if in a sudden blaze of spiritual enlightenment): "Ahaaa! OKaay!"

Unlike what seemed most likely, they seemed to relish the food, even the rice sans jeera. 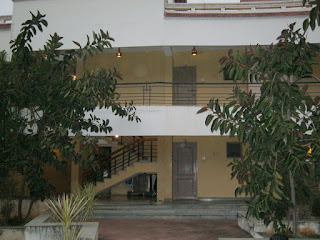 One of the highlights of the Tiruvannamalai visit were the roads. Not only the NH4 stretch from Thane to Bangalore, but even the Hosur - Krishnagiri diversion en route Pondy is top class. Maharashtra has to learn a lot from the South in this respect. 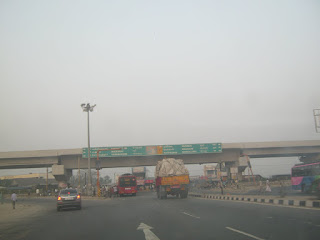 It's after Krishnagiri that the smooth ride gets a jolt, immediately following the right for Tiruvannamalai. This diversion turns into a small lane of sorts beyond a point. No map cares to let you explicitly know but you need to pass through the shabby railway crossing of Samalpatti and then turn left towards Uttangiri before you proceed for Tiruvannamalai through Chengam. 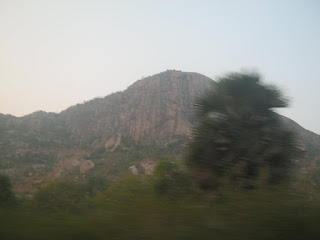 The last leg from Samalpatti to Tiruvannamalai proves slightly prolonged, replete with potholes and traffic ... more so, if you are travelling at odd hours. We had left Chitradurga at 5 am in the morning, so it was not a big deal reaching the Arunai resort by 12.30 noon. But in case you are planning a visit, time the last leg suitably.