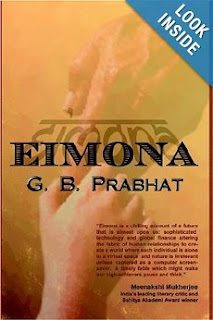 Eimona is a gripping tale of co-existing contrasts in a tech-savvy, money-minted new-age – abundance & deprivation, loneliness & celebration and advancement & regression – seen through the eyes of an aging protagonist of the old order who sees a future that begins to dictate even before it beckons from the mists of the unknown.

Whether it's the endearing protagonist Subbu, his grandson Bharat, Bharat's go-getter wife Indu, their innocent daughter Maya or the several others who circle the life of this family of four - the author brings out the most profound emotions lurking in the seemingly inconsequential actions of every character.

The author’s vivid imagery of the world around him is as hilarious as it is heart-wrenching – we have smart career-women seeking ready-to-deploy hubby packs of good looks & meek authority; the sophisticated demeanor of professional life degenerating into shabby movements of retired confinement; societal code of conduct for bereavement and celebration; the incidental well-being of families blessed with ample space, adequate money and less time; and of course - the umpteen vultures of culture selling best-of-breed solutions for fighting depression, blooming love lives, deciphering child psychology besides a host of social and anti-social issues disconcerting the high-achievers of the new generation.

The trinkets of observation - principally seen through the roving eyes of Subbu - are laced with effortless humour - an astute blend of Wodehousean wordplay and Chaplinesque graphic display. They subtly highlight the self-defeating ingredients of self-centered strides - the intrusive courtesy of shopping malls, fleeting values of modern families, switching loyalties of corporate worlds, matrimonies bound by contractual obligation and supersonic success stories demented by brimming insecurity.

However, the perfect poise of Subbu’s detached tongue-in-cheek commentary is somewhat lost in the volcanic climax of the novel. Knowingly or unknowingly, the author tilts the moral scales in Subbu’s favour rather forcefully. Towards the end, Subbu has his stamp of incisive authority virtually on every episode. One wonders whether the hypocrisy of the new order could have come about more subtly.


Nevertheless, the pace of the novel is extremely alluring. The fag-end drama, in what’s a social commentary, is narrated with best-seller finesse. In fact, the novel has all the essential elements to make it an engaging film plot.

This is a one-of-a-kind effort that makes you wake up and take notice. And the story is best read, not described.

G B Prabhat is the founder of Anantara Solutions - a second generation outsourcing company engaged in business & technology consulting worldwide.

My father was the eldest of two brothers but the second issue of his parents. The first was a daughter. He was tall and lean with protruding front teeth, a slight hunch, balding head and brown skin. His staple attire was dhoti-kurta but for official site visits, he wore khakhi shorts, shirt and a sun hat. Years later, the same hat lay hooked to the wall - his mute and forlorn memento.

The untimely demise of his mother dumped huge responsibility on his young shoulders. But he rose to the occasion on all fronts – running household chores, tending to his siblings and studying at a modest Girgaum school. Despite being a bright student, he could never complete his matriculation, a blemish that cost him dear in his vocation. In hindsight, I feel his matriculation failure was only an early clue to his enigmatic life ahead.

Thanks to his special flair for machine repair and carpentry, he managed to secure admission in Baroda’s Kala Bhavan, the sole place open to non-matriculates at that time. While completing his diploma in Civil Engineering, he rose to fame as a bright and enterprising student adept at making innovative wooden artifacts. His creations still adorn the homes of several of our relatives’ - mirrors, photo frames, toys, stools, chairs, tables and cupboards made with amazing trademark precision. He always carried a foot ruler in his pocket. Wherever he went, people consulted him on variety of things but he offered his earnest advice only after elaborate measurements on the ruler.

Like the foot ruler, a torn, weathered wallet was his constant companion. My mom often nagged him to throw it away but he reckoned it as his lucky mascot – one that had presumably never emptied ever since he had bought it. But the wallet too, in the end, lay bare like him and needless to say, nobody treasured it after him.

He got married while he was studying at Baroda. After his diploma, he got a temporary job with the PWD at Ahmedabad. Whether it was to do with his non-matriculate status or something else, he was invariably earmarked to fill temporary vacancies – as sub overseer, tracer and even carpenter at times. This meant his constant relocation to remote places in line with the projects at hand. For me, this meant a lonely upbringing at my grandfather’s place in Devbagh away from my parents. My grandfather was a good soul but a hard task master and I would often be at the receiving end of his snide remarks. But my father was of the firm belief that constant touring with him would only spoil my future. I wish he had thought otherwise...

His stars eluded him at work throughout his career. But in each of the temporary roles entrusted to him, he worked with permanent devotion. Managing labour, contractors or finances...... he undertook every assignment to the liking of his superiors. He was particularly popular among the British engineers for his honesty and integrity. But all the recognition and accolades were limited to the completion of the project in hand. After that, he was left yearning for the next assignment. And his luck continued to dodge him, even furling cruel jokes at times.

His joy knew no bounds. His project at Chaniyar had been a recent success and he assumed this telegram as the direct appreciation of the achievement. He wrote several letters in a jiffy informing his relatives of the good news. It was only a careful read that revealed the embarrassment - N L Joshi in the telegram stood for some Nathabhai Lalabhai Joshi, not Narhar Laxman Joshi that was my dad’s name. Dad took much time to recover from this shock. But fate had even more bad news in store – soon he lost his job as there was no vacancy left to accommodate him anymore.

Thanks to the timely magnanimity of a Parsi officer, my dad was later appointed as overseer in Rajkot under the Kathiawad PWD. His life now seemed back on track. He even came home during an AIR RAID PRECAUTION programme in Mumbai. After the training, he took me to Rajkot. That was undoubtedly the best moment of my life. For the very first time, I was with him away from Devbagh. More than the ice creams, toys and films that I was showered with; I enjoyed the charms of his undivided attention.

But soon after, his health began to fail him. No treatment seemed to work on him. To make matters worse, his financial health declined and I was sent back to Devbagh. That was the end of my euphoria. This time, destiny had a fatal note in its music, I was to discover later.

Months later, he came home on unpaid leave. This time, he looked crestfallen, completely broke that he was in body, mind and pocket. We would go for long walks in the evening and he bought me sugar cane juice and snacks. But a dark corner of my heart ached at the reality that the money that bought me these goodies was not his. Nevertheless, having him around meant the world to me. Gradually, his health began to show some improvement. The blizzard in his life seemed to have slowed down, the flakes of snow falling apart to reveal distant rays of hope.

Just when things began to look up, a letter from his office cautioned him of his likely termination on failure to report immediately as his leave limit was exhausted. On an impulse, he rose to leave against the will of everyone else. Weak that he was, fever stuck him even as he boarded the train to Rajkot. After that, he showed rapid deterioration and each passing day made him more helpless and shattered. Finally on one fateful day, a telegram conveyed the bad news. My father was no more.

“Whether a bridge or a building, one has to spot the weak point in any construction”, he once told me while helping me with a paper lamp that I was making for Diwali. Alas! He failed to see the weak point of the very structure that housed his self respect. And when it finally collapsed, the debris crushed my childhood for ever.
The more I think of my father, the more difficult it is to fathom his nature – he vociferously fought double standards all around him but was a mute spectator to the hypocrisy at home right under his nose. He was exceptionally brilliant at his work but remained all life a non-matriculate at the mercy of a temporary job. He was deeply concerned about me, yet he left me alone to grapple with the vagaries of an obliged upbringing. He exhibited great courage to fight the odds of his wayward employment but could not confront his elders to protect the interests of his own family.

His demise leaves a bagful of unanswered questions in my mind. Why did he have to head for Rajkot in a self-defeating do-or-die mission? Why did he cling to a temporary job on a scant salary all his life? Why could he not find his luck in Mumbai like so many of his peers? Why did his penance come at the cost of his family’s well-being?

Hard as he tried to defy his fate, his life ended in mournful defeat. This inheritance of loss marks the beginning of my life journey. I can never hate my father but the very fact that providence has forced me to pity him remains one of the greatest tragedies of my life.

This is a tribute to the timeless enterprising spirit of my grandfather - the piece is a free-wheeling translation of the chapter "My Father" plucked from the anti-autobiographical book "Damu' world" penned by my father Dr Y A Raikar.
Newer Posts Older Posts Home
Subscribe to: Posts (Atom)